Two Blogs in One Day

Somedays it's just non-stop! Today, I'm super busy! Not only am I being interviewed by my good friend Ash Krafton on her Kraftmatic Adjustable Blog (my very first interview!!!), I'm also over at the Black Rose Blog talking about my favorite books (and believe me, it was not easy to narrow it down to one!). So, I hope you get a chance to stop by to check out these two great blogs!
Posted by Tricia Schneider at 9:55 AM No comments: Links to this post 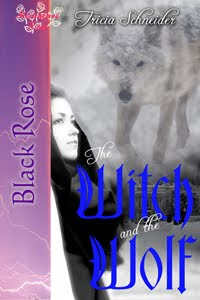 I'm happy to report I have a release date for my e-book The Witch and the Wolf. Due July 21, 2010 from The Wild Rose Press!! I'm so excited and simply had to share the news. It's 73 pages long and it's labeled 'spicy'. Oh my!


Lillian Merriweather hadn't planned to get caught in a blizzard while traveling the English countryside. Nor had she planned on finding refuge in a house full of secrets. But Lillian has secrets of her own. And what she's running from is not far behind...


There were several moments Jeremy North suspected he suffered hallucinations. Most of those times had been when he had first begun to change into the beast during the full moon. And now, as he answered the knocking he had at first imagined to be the pounding in his skull, he wondered if the brandy he had been drinking this evening was perhaps tainted. He could not quite believe his eyes.


He placed the bundled woman onto the sofa, ignoring the fact that the snow was bound to create a water stain on the fabric once it melted. He leaned over her, pushing the curly brown strands of wet hair off her face and checked to see if she still breathed. Satisfied when he felt her breath on his hand, he went back to the corridor.

And then, she smiled.
Posted by Tricia Schneider at 5:07 PM No comments: Links to this post