I am continuing my interviews with the seven singles sharing a summer house in Beach Haven, New Jersey. Since I’ve previously talked with two of the women, today my subject is the most vocal of the male residents, college drama instructor, Ogden “Kip” Lee.  When I step outside onto the back deck, I try not to show my reaction at finding him wearing only a pair of baggy shorts and a pair of sunglasses. Kip’s physical appearance is impossible to ignore. I honestly expect him to cock an eyebrow and ask if I can smell what he’s cooking.

Hot Fun in the Summertime by Chicki Brown – On Kindle http://amzn.to/dWZSxA and Nook http://bit.ly/k4Z172 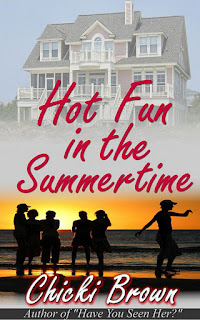 Kip: (clasping his hands behind his head and his biceps suddenly expand like he blew them up with a bicycle pump.) “So, what can I do for you?

Me: (Wow, loaded question. I sink into the cushioned Adirondack chair next to him and place my recorder on the table between us.) Do you mind?

Kip:  Not at all, sweetheart.

Me: (Normally I would’ve launched into a speech about political correctness after being called sweetheart by a man I just met. But somehow I sensed that he didn’t mean it in a condescending way.) You know I’ve already spoken with Shontae and Kinnik, but before I leave I’d like to get the male perspective on your summer arrangement. Why are you here?

Kip:  (removes his shades and rests them on the table) You mean the ladies didn’t give you their opinions already?

Kip: No reason to front. I’m only here to relax and party. No goals. No ulterior motives. I work hard while school is in session, but once vacation starts I leave Professor Lee in New York and go back to being just plain old Kip.

Me: (thinking there was nothing at all plain about this chocolate Adonis) So, how do you see things going this summer?

Kip:  (scratches his chin and smiles) To tell you the truth, nobody ever knows how it’s going to go. This summer I’m the only one who’s not waiting for something. They’re all on some kind of countdown.

Me: Which of the countdowns do you see coming to fruition?

Kip: From what I’ve picked up from listening to the women, Jo’s hoping Walt pops the question. It’s not happening, if you ask me.

Kip: (snickers) Walt’s been married twice, and he and Jo have been together five years. I know what a man looks like when he’s content, and in my opinion he looks pretty content with things just the way they are. Doc has a plan, and for his sake, I hope Linda’s finally ready.

Kip: (sighs and then smiles) Because he’s banking on it. Ever since last summer, he’s basically taken himself out of circulation for her. If it were anyone but Lin, I’d say he made a stupid move.

There are too many women in this world to sit around waiting for one to decide whether she wants you or not. I don’t think she’d do it on purpose, but I hope Lin doesn’t end up jerking him around.

Me: You said everyone is waiting for something. I didn’t get that impression from Kinnik.

Kip: (chuckles) As long as there are men around, K always has a target. I’m afraid she’ll use her mojo on Devon.

Kip: Shontae won’t have a chance if K aims both barrels at my boy.

Me: She is stunning.

Kip: Kinnik isn’t just beautiful. She’s got skills. (He winks, and I choose to let the comment slide.)

Me: But Shontae seems to be a really sweet person.

Kip: (frowns) She is, and that’s the problem. Sometimes being sweet can work against you. She doesn’t know how to fight dirty. It’s not in her. Fighting dirty is all Kinnik knows. I just hope I don’t end up having to pry their claws out of each other.

Me: I understand you invited Devon this year. Do you see him fitting in with a group that’s been together three years?

Kip: Devon can adapt to anything. That’s why he’s such a good actor.

Me: From what I’ve seen, you folks are in the minority here on the island. Does that bother you?

Kip: (The way his mouth twists, I see I’ve hit a tender topic.) Not me.

Me: Do you think your neighbors are as open minded?

Kip: No matter what their attitudes are, I’m still gonna do Kip. The neighbors don’t have anything to do with my social life. Besides the ladies vacationing in Beach Haven don’t have any problems with it. As far as I’m concerned, women are women. I believe in equal opportunity.

Me: Well, I hope your summer turns out to be all you’re expecting.

Kip: (scans me from head to toe before returning his sunglasses to his face with a devious smirk) Oh it will. Why don’t you stick around for a few days? You’d fit right in.

Me: (feeling a bit uneasy from his scrutiny and the underlying sensuality in his tone) Thanks, but I have a deadline to meet and my editor won’t take any excuses. It was great meeting you, Kip.

Kip: (clasps his hands behind his head once more) You too, sweetheart. If you change your mind, we’ll make room for you.

Click here to read another character interview with Kinnik Watkins by Chicki Brown.