No Accounting for Love by LM Gonzalez #25daysofbooks

This year I'm counting down the days 'til Christmas with books and other fun things readers enjoy! I love the Holiday Season so I'm sharing ideas for you to fill your holiday stocking! 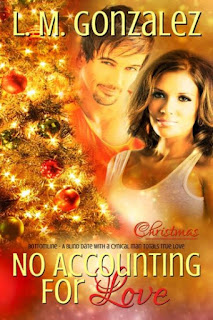 No Accounting For Love


Laura Cortez, a single mom, works full-time and takes classes toward an accounting degree for a better income for her family. She meets her dream man on a blind date set up by their siblings but thinks she should have stayed home. When he asks her to his company’s Christmas party, she agrees against her better judgment; she’s attracted to him despite all the reasons she shouldn’t be.


Tony Alvarado has spent his life, ever since his marriage, building his accounting firm because his ex-wife nagged him constantly about money. When she divorced him, claiming he was always working, she took half his money, and his son. Now he believes women only date him because he’s rich. His reactions to Laura puzzle him, but he continues to see her because he can’t figure her out.


Will the holiday season help them forget the liabilities and balance out the miracle of love in adding together two lonely hearts?

“Where are you going?” Laura asked and admired a house whose whole front yard was a Christmas wonderland of lights, complete with Santa Claus and reindeer in the front yard. “Oh, isn’t that pretty?”


“To Dallas.” What was it with her and Christmas lights?


“Ummm…I hope you don’t get caught in a snowstorm.”


“I would love a white Christmas,” she said, “if I could stay home.” She giggled. “I don’t want to be driving in it. What are you going to do in Dallas?”


“I’m going to see a potential client. It would be an asset to my company to acquire him. I won’t return until Saturday morning.”


Laura knew that was the day of his Christmas party. She watched as Anthony maneuvered the car up her driveway.


“Have a good trip, then. And thanks again for dinner.” Laura opened the car door as he shut off the car’s engine.


“I wouldn’t have missed it.” Laura climbed out of the car. She watched as Anthony also got out. She didn’t want him to walk her to the door. She’d had enough awkwardness for one night. But she didn’t say anything.


He walked with her. Her heels beat a fast clickety-click on the sidewalk, and she unlocked the door quickly.


“Goodnight,” Laura said and looked up at Anthony. He was so close she felt the warmth from his body. She caught the scent of his cologne again—that mix of woodsy with mint.


“Goodnight,” he said—and touched her shoulder and bent his head.


Heat rushed from his touch through her entire body, as it had in the restaurant. “Don’t,” she said, even though she longed to lean into him and find out how his lips would feel against hers.


“Why not?” He still leaned toward her.


“Because we’re not going to see each other again, and…” What if I can’t forget you? She looked down and opened the door, said, “Goodnight,” and stepped inside her house.


Anthony stared at her and asked, “You really don’t want me to kiss you?”

Oh, yes! But you don’t. You’re just doing it because that’s what you do at the end of a date.


Anthony seemed to want to pursue the issue, but then he only said, “Goodnight.”


Laura heard the car door shut and the engine start as she shut her door and leaned back against it. She heard Anthony drive away.

What a night! She looked toward the mirror against the far right wall. Stepping in front of it, she scrutinized herself. To her eyes, she looked fine. But she wasn’t Anthony’s type, that’s all. She smoothed some loose hairs away from her forehead. She took the barrette off.

I wish I were his type. As Laura walked to her lonely bedroom, tears filled her eyes. I’m such an idiot!


Tricia
Posted by Tricia Schneider at 8:09 AM