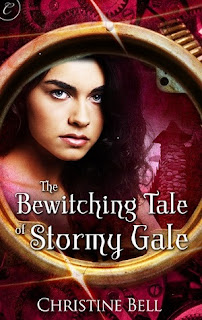 The Bewitching Tale of Stormy Gale by Christine Bell
My rating: 5 of 5 stars

There I was, retired from time pirating, enjoying a full if somewhat conventional life as a wife and mother. Then a chance encounter with a stranger drew me back into a world I'd thought I'd left, quite literally, in the past. From his odd behavior and even odder answers to my questions, I knew Phineas Grubb was up to something. I should have trusted my instincts—before he pulled out a time-travel mechanism and dragged my brother, Bacon, back with him...

The infamous Witch Trials may have ended a few years earlier, but the people of Salem are still pretty touchy about outsiders that appear in town as if by magic. Thanks to Grubb, my brother's been accused of witchcraft and thrown in jail. Now it's up to me and my husband, Dev, to save Bacon's bacon before the hysteria starts up again, and the course of history is altered forever...

This novella is the sequel to The Twisted Tale of Stormy Gale which I also reviewed.

My Review:
Although you could probably read these out of order without getting too lost, I highly recommend you begin with the first. There, we meet all the major characters and we get to fall in love with Dev, who becomes Stormy's husband. The first story is definitely in my opinion a romance, the second I can't quite label as such. Dev and Stormy are already married with a precocious daughter in this book, but I was pleased to visit this world and these wonderful characters again.

Ms. Bell's writing style is riveting. From the very beginning, I'm pulled into Stormy's viewpoint where she takes me on an adventurous ride through time. With this journey she chases a suspicious time traveler back to Salem, Massachusetts, where the infamous witch trials are fresh in the memories of the residents. There she must save her brother who has been arrested as a witch, an event that threatens to ignite another mass hysteria of witch hunts. Stormy and Dev need to save Bacon and stop the rogue time traveler from messing up the events of history.

I thoroughly enjoyed reading this story just as much as the first. As of this moment, I don't see any more books published in this series, but I certainly hope that changes sometime in the future. I'd love to read more of Stormy's time-traveling adventures and snarky dialogue.


More About This Book:
Amazon
Author Website
Posted by Tricia Schneider at 11:30 PM No comments: Links to this post


Welcome to fellow Wild Rose Press author, Linda Nightingale, to my blog today for the release of her newest book, Morgan D'Arcy: A Vampire Rhapsody! 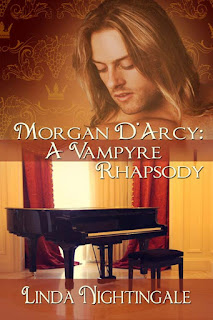 The Birth of Morgan D’Arcy

My favorite of the heroes in my books is probably Morgan.  He is charming, svelte, and handsome.  What’s not to like?  He’s a vampire.  What’s that little tidbit amongst friends?

I started writing Sinner’s Opera, the book of my heart and Morgan’s first starring role, in 1992.  I’d then titled my masterpiece of wonderment The Vampyre Effect because, in my vampire mythos, they are viral mutations of human DNA.  The blood-borne pathogens, transferred in a ritual blood exchange, attack the nucleus of the cell, making mortals immortal overnight.

This first book grew to over 1,000 pages.  Like a good reporter, I followed by subject everywhere but the bathroom!  Then I waited outside.  (Kidding, vampires don’t go to the loo).  So, sadly, I had to trim the less exciting details from the book to bring it down to publishing size.  Sinner’s Opera was published in 2014.

Today!!! Morgan D’Arcy: A Vampyre Rhapsody is being released by The Wild Rose Press.  Did I mention I love my editor? It’s from the Black Rose Line and is available at the usual channels, including TWRP website.  Rhapsody is a collection of short stories and a novella, detailing Morgan’s journey through the centuries in search of the woman of his dreams.

A titled lord, concert pianist, and … vampire, Morgan D’Arcy has everything he wants…except what he most desires…the woman of his dreams—the search is on.

Blurb:
The greatest enemy of a vampire is boredom. Four centuries of existence have taught Lord Morgan Gabriel D'Arcy to fear nothing and no one. Humans and their weapons have little chance against his preternatural speed and arcane powers. Vampires are viral mutations of human DNA. Still, the Vampyre code requires secrecy, and he has learned to hide his nature from the world. The lure of mortality, of a life in the sun, puts Morgan again and again at the mercy of calculating human women though they fail to consider his charm and determination into the equation. However, even grooming a future bride from infancy proves to be fraught with heartbreak. And second chances are not always what they seem unless... you are Morgan. Immortality and beauty, aren’t they grand?

“…Morgan…is a tour de force of egotism, wit, sensuality, and talent…” ~Author Toni V. Sweeney
“Morgan D’Arcy is a class act and the most arresting vampire I’ve ever encountered in literature or films.” ~ Historical and Paranormal Romance Author Beth Trissel

Each of us, at some time, wishes to stand naked in passion’s temple and face deepest, darkest desire—to be an innocent victim to lust.  I knew all about lust.  Lust.  Bloodlust.  In the ecstasy of the Kiss and the rapture of the kill, the two fused.

I glided to the sofa, perching on the arm.  Mischief whispered in my ear.

My friend Lucien, head of the Council that governed the Vampyre, would be livid if I endangered our secret. I might even be punished. So what?  For a long time now, I’d faithfully toed the line, giving the powers that be no reason to slap my hand. No one was likely to nominate me for sainthood, and I was tired of being a good man.  Envisioning an outraged Lucien crumpling the newspaper, I laughed aloud.  For days, I hadn’t laughed. I was still chuckling when I dashed off a Men Seeking Women romance ad.

Vampires were no longer monsters, but fine seducers, purveyors of passion.  Victims abounded. As I sampled the replies, I was disappointed and left fifty beautiful women disappointed as well, thinking me another nut not a vampire.

I failed to find the thrilling vintage I sought and forgot about the ad.
**
“Hello, darlin’.” Her voice was lazy, honey-sweet and sensual.  “You look like you could use some company.”

I took a deep breath of the vintage I had sought. “I could.”

“You got it.”  Manicured red nails dug into my shoulders. “I’ve been waiting for you all my life.”

A first-class, round-trip ticket to the Turks and Caicos Islands dropped on the keyboard. Another fell beside it. One of the tickets was issued to Morgan Gabriel D'Arcy, the other to Fiona Allman. I had to admire her style, but she couldn’t have come from the ad. Names and addresses weren’t given.

Fiona was the given.

“What you waiting for? Your bags are packed. We’re leaving on a jet plane.” The enticing voice grew darker, duskier. “To sunshine. No more of this fricking rain.”

“It’s me, darlin’, the one you’ve been waiting for.” Soft, warm lips caressed my cheek, her fingers working magic on the tense muscles in my neck.

The scents of rain-perfumed skin, Italian leather, and blood laced with single malt whiskey teased my six senses.  I hadn’t fed in nights. The craving wrenched my stomach.  Saliva broke beneath my tongue. Her fingers stroking my neck awoke another, totally sexual desire. I threw back my head and laughed.  I was in trouble. At last!

She smoothed the hair back from my forehead. “Come on, pretty baby, get up. We don’t have much time. Heathrow’s a good hour’s drive from here.”

The throaty laugh was as sensual as her touch.  “I’ve checked your schedule. No personal appearances. These poor bastards will wait until Lord D’Arcy returns. They have to. You are the show.”

“How did you find me?”  I liked the way she stroked my libido. An image of taking her on the piano heated my blood. “How did you know my name? And my schedule.”

“Does it matter?” She tucked my hair behind my ear and sucked the lobe into her mouth. “I want you to shaft my brains out.” (last sentence rewritten to bring to PG-17)

It didn’t matter how, only that she had found me. 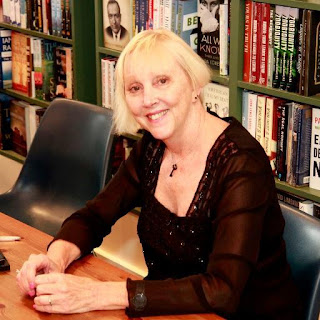 Born in South Carolina, Linda has lived in England, Canada, Miami, Ft. Lauderdale, Atlanta and Houston.  She’s seen a lot of this country from the windshield of a truck pulling a horse trailer, having bred, trained and showed Andalusian horses for many years.

Linda won several writing awards, including the Georgia Romance Writers Magnolia Award and the SARA.  She has two wonderful sons, is a retired legal assistant, member of the Houston Symphony League, and enjoys events with her car club (in her snazzy convertible).  She owns a piano she can’t play without the remote(it has a player system).  She loves to dress up and host formal dinner parties. 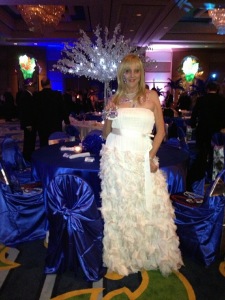 Other Reads by Linda Nightingale:

Save
Posted by Tricia Schneider at 7:01 AM 4 comments: Links to this post 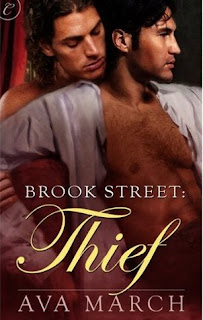 Thief by Ava March
My rating: 5 of 5 stars

London, 1822. It was only supposed to be one night. One night to determine once and for all if he truly preferred men. But the last thing Lord Benjamin Parker expected to find in a questionable gambling hall in Cheapside is a gorgeous young man who steals his heart.

It was only supposed to be a job. Cavin Fox has done it many times—select a prime mark, distract him with lust, and leave his pockets empty. Yet when Cavin slips away under the cover of darkness, the only part of Benjamin he leaves untouched is his pockets.

With a taste of his fantasies fulfilled, Benjamin wants more than one night with Cavin. But convincing the elusive young man to give them a chance proves difficult. Cavin lives with a band of thieves in the worst area of London, and he knows there's no place for him in a gentleman's life. Yet Benjamin isn't about to let Cavin—and love—continue to slip away from him.

My Review:
This book wouldn't let me go. I started reading it late one night. Just a few pages, I thought, until I fell asleep. Two hours later, at 2am I was still awake enjoying this captivating romantic read. I kept turning "just one more" page until I reached the end. I simply couldn't stop until Benjamin and Cavin found their happily-ever-after. And these two men definitely deserved it! After all that they'd been through, they deserved to find happiness in each other's arms.

I definitely enjoyed reading this book! This is the first book I've read by this author, but I'll be reading more from Ms. March if this is the beautiful, tear-jerking prose she is accustomed to writing. I've already added the rest of the Brook Street Trilogy to my TBR list. I highly recommend this book to anyone who wants a sweet, passionate, charming romantic tale.


View all my reviews