News Reporter: it's a great gig

I'm pleased to have Lyndi Alexander visiting my blog today! And what a story!
One of the best periods of my writing career was spent in several years as a daily news reporter at the South Dade News Leader (http://www.southdadenewsleader.com/)  in Homestead, Florida. The job opened doors to me I’d never have expected.

I interviewed senators, doctors, astronauts, hurricane specialists and more. I could pick up the phone and ask for a tour of just about anything and got a warm welcome. I got to fly a F-14 jet flight simulator. (Good thing it wasn’t real—took me less than seven minutes to totally destroy a $6 million machine… oy.)

I wanted to bring a piece of that experience to my latest novel, Love Me, Kiss Me, Kill Me, released this month by Hydra Publications, when I created Sara Woods, the young woman who comes to the Ralston Courier, a small paper in Ohio, to begin her life again after a nasty divorce. She isn’t new at the business; she’d worked as a reporter in a much bigger paper in Pittsburgh. But what she’s about to find is a bigger story than she’d ever encountered before—one that could actually take her life.

Small towns are a world unto themselves, with a lot of secrets hidden behind common doors that aren’t open to outsiders. It’s easy to see how someone new to town might miss some obvious clues, or some alliances that seem innocent, at least to begin with. I know it took me a long time to cultivate the right sources of information to help me sort through what was true and what was not.

But then I had all the time in the world. Sara doesn’t.

Young women are dying in this town, perfectly healthy young women, and someone has to find out why and stop the people who are responsible. If the police aren’t doing it, and the doctors can’t figure out why, then who else is left? Circumstances come together to leave Sara in that position. Then the trouble starts. 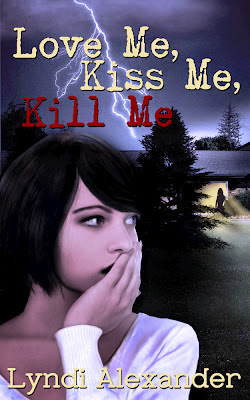 Running away isn’t necessarily the answer.

In her mad rush to escape a failed marriage, Sara Woods takes the first job available and lands in the middle of a mystery. Her first assignment as a news reporter for the Ralston Courier is the investigation of a string of deaths, all young women, all her age.
She becomes a patient at the Goldstone Clinic, a local mecca of healing, to deal with chronic pain from her past. But all is not as it seems at the Goldstone,  its doctors and nurses all the picture of perfect beauty and health. Patients at the clinic first seem to get better, then they deteriorate. Sara enlists the help of Dr. Rick Paulsen, who teaches her how to access her internal power, skills she never knew she had, revealing secrets from her past. Police officer Brendon Zale also takes an interest in Sara, but he acts like a stalker, watching her every move, and he won't leave her alone.
As she digs deeper into the story, she tries to choose allies wisely, but not till the last confrontation does she discover the identity of her true enemy.
By then, it’s too late.


Gloria kept me on a full round of assignments, though I still didn’t have a regular beat. I interviewed farmers, called state legislators on budget talks, and wrote obituaries. But I found that whenever I asked for time to do further investigation about Lily and the others, Gloria bent over backward to make it happen for me.
While I was grateful, I thought it was unlike the hard-bitten editor to allow such devotion to a cause that had been shelved by the police and everyone else. She certainly didn’t seem to give others that leeway. After several days, I found myself alone with her by the coffeepot in the hallway between the news and sports departments, a pencil stuck behind one ear, looking very intellectual in the tortoise shell glasses. Her movements were stiff, caused by arthritis, according to newsroom scuttlebutt, but she refused any medication and denied any disability. I asked her about Lily.
“Gloria, I get the feeling you should be telling me to get over this case and move on. But you don’t.”
“No.” She poured a tall mug of black coffee.
I waited for more of an explanation, but she didn’t elaborate. I shoved several quarters in the snack machine for some cheesy crackers. “So you think it’s worthwhile.”
“Yes.” Gloria stared out the window, jaw set.
She was as stubborn as I. A little smile inched across my lips. “Because?” I said pointedly.
She looked up and down the hall, and started to speak, but bit her lip instead. “Come to my office,” she said, and marched away. After a moment of stunned silence, I followed her. She waited till I was inside, then shut the door. She turned on her radio, loud. National Public Radio’s Fresh Air,  and Terry Gross boomed forth, interviewing a movie director about independent film making. Gloria gestured at the chair next to the desk, and I took it, but she sat on the counter under the window, cranked it open so she could smoke.
She took her time, burning up half the cigarette before she finally turned to me. “I want you to get them.”
“Them who?”
“The people who are killing all these women. Because there’s more than four. There’s more than the ones you pulled from O’Neal’s files. By my informal count, there’s at least 17.”
“What?” My voice, tight with surprise, got almost shrill.
She glanced at the radio, then at the door, then at me.
“Sorry,” I said, much more softly. “Where does that number come from?”
“Several people have taken notice of the deaths, the pattern, the statistics. We’ve compared notes and done what we can, but the authorities were less then helpful.”
“Good thing that’s changed,” I said with a heavy helping of sarcasm.
She smiled without warmth. “Cops are cops. They’ll never change.” She tossed the cigarette butt out the window. “When you’re ready, I will give you my contacts. Because I want you to nail the bastards. They killed my baby sister.”

Posted by Tricia Schneider at 12:30 AM