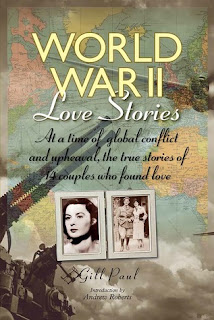 September 1939 saw Adolf Hitler drive the world into one of the greatest conflicts the world has ever known. The atrocities unleashed by the Nazi regime were unprecedented; families were torn apart, millions were murdered, and a cloud of fear cast over the world. But somewhere, love and hope remained ignited.

World War II Love Stories tells the unforgettable stories of those couples brought together by war. They are enduring tales of great love, intense passion, and often tragedy, but most of all they are tales that celebrate the human spirit at its time of greatest trial.

I admit, I almost put this book back on the shelf. Not for lack of interest, but I have so many books at home to read. I really should read some of those before I buy more, but as I'm an avid reader this inner debate usually ends badly for my bank account. Yes, I bought this one, too. I found this particular hardcover at the local B&N in the bargain section so the price was just right. The cover with the large bold words WORLD WAR II caught my eye first. I'm usually on the lookout for WWII books for my husband, but the smaller LOVE STORIES beneath called to me in particular. And I'm so glad that I read this book!

There are 14 chapters within these 191 pages each featuring a couple who discovered love and romance during the time of World War II. It was compelling reading. I enjoyed each story, even those that ended sadly. I'm all about the happily-ever-after, that's why I typically read romance, but tragically not all true-life stories end happily. Still, there was enough love to overshadow most of the sadness. I would recommend this book to anyone who wants to read about some interesting true-life romances, and also to those who would like to learn more about this time period in history. As well as learning about the love these people shared, I also learned about the war and how these men and women lived and survived during that tragic time. It was an informative book written in a very fast-paced style that kept me turning the pages.

Here are the couples you'll read about:


View all my reviews
Posted by Tricia Schneider at 9:49 AM