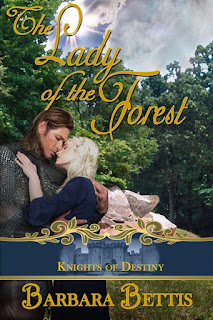 He must pursue his enemy; she must protect her people. Can their love survive the duties that drive them apart?

When her elderly husband dies, Lady Katherine fakes her own death and disappears into the forest with others escaping the brutish new lord. Determined to protect her people, she knocks the wrong man senseless. But Lord Henry isn't an enemy, he's the brother of her childhood friend. Although his tender confidence tempts her, she's bound by duty.

Henry of Chauvere has found the one lady he wants for his own, never mind she's tied him hand and foot. When he learns the king has ordered her to wed Stonehill's ruthless new master, he insists Kate seek haven with his sister. But she won't desert her friends. Henry vows to solve her problem, provided he catches a traitor before the threat from Kate's past catches her.

When a daring rescue compels Henry and Kate to join forces, their attraction grows into love. If only duty didn't drive them apart.

EXCERPT:
Kate drew the dagger sheathed at her waist and set to the knots at his wrist. “Two days ago, soldiers began searching for strangers. Friends at the castle told us a traitor roamed the forest, and Sir Mortimer gave orders to apprehend or kill him.”
“Then it appears Sir Paxton has reached your lord and recruited help. He has a talent for
spinning tales.”
The ropes gave way and Kate stepped back.
Henry massaged his wrists. “Your men tie a good knot. Have a lot of practice, do they?”
Kate jerked her gaze to his face. He jested at a time like this? Yes, blast the man, a smile lurked at the corners of his lips.
Her glance slid from his mouth to his eyes, and she gasped. “Your poor face. Here,” she handed him the dagger and waved at the binding around his ankles, “you cut while I pour more water. If that wound isn’t cleaned, it may turn bad.”
She’d retrieved the bowl from the floor where she’d dropped it earlier, and turned to fill it with cool water when a pair of strong hands gripped her shoulders. A deep, rough whisper brushed her ears.
“Never give a weapon to the enemy.”

Bio:
Award winning author Barbara Bettis has always loved history and English. As a college freshman, she briefly considered becoming an archeologist until she realized there likely would be bugs and snakes involved. And math.

She now lives in Missouri, where by day she’s a mild-mannered English teacher, and by night she’s an intrepid plotter of tales featuring heroines to die for—and heroes to live for.

Posted by Tricia Schneider at 9:51 AM