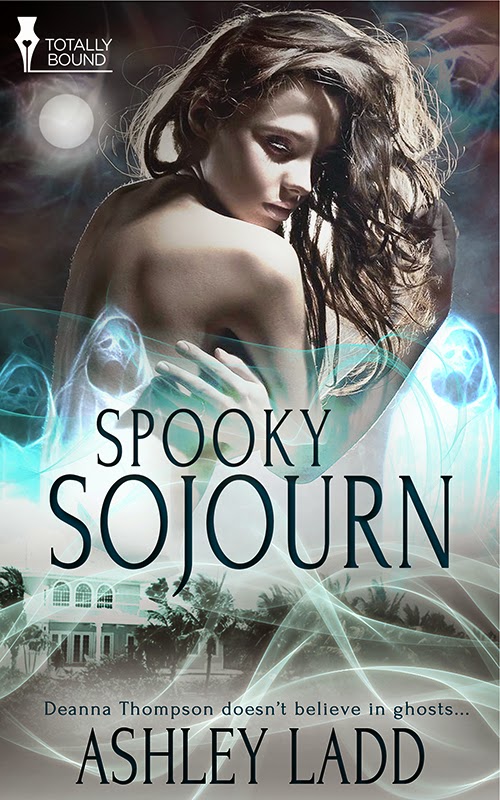 Someone’s trying to kill Deanna, but is it the ghosts she doesn’t believe in, the rich socialite who might be a murderess, or someone else with a beef against The Gilroy Hotel and Resort that Deanna has just been hired to manage?  The Gilroy’s owners want the ghosts, or whoever is causing the trouble at the hotel eliminated, and they are pressuring Deanna to do the job as quickly as possible. Harry DeVeaux, paranormal investigator comes highly recommended to do the job and against Deanna’s better judgment, she hires him.

Although Deanna thinks Harry’s crazy for believing in ghosts and Harry thinks Deanna has a closed mind to the possibilities of ghosts and they highly annoy each other, sparks fly. Deanna can’t help but fantasize about Harry and inspired by a romance convention visiting her hotel, writes her fantasies in a private blog that Harry finds, hacks, and reads. Ooh la la!

Deanna reread her fantasy, barely able to believe she’d penned it, wondering if she should delete it. Did she really want to make out with Harry, a perfect stranger, on a public beach? Did she really want her words on the Internet, even in a supposedly private blog under a make-believe name?

Well, it was confidential, right? As long as she didn’t give anybody the web address or password or tell them about it, it would remain secret.

Enough fantasizing! She had to get back to work. Dragging the files out, she familiarized herself with the ghost sightings as well as Lynette’s and Grant’s history. By the time she finished, she knew how they’d died and the theories about their suicides-slash-murders. She also knew that everybody was afraid to point fingers at the now very influential and powerful Roxanne Cambridge-Anderson. Could Roxanne be behind the haunting nonsense? Did she want the hotel shut down? But that made no sense. The rumors portrayed Roxanne as a murderess. It wouldn’t be in her best interest to keep their legend alive.

Deanna’s temples began to ache the harder she thought about everything, so she decided to go to sleep. Hopefully she’d awake if any hijinks took place in the bowling alley.

About three a.m., deafening booms awoke her. Light brightened lane fourteen and all but one pin lay scattered on the wooden floor.

Groggy, Deanna tried to gather her senses. She looked around then, to her horror, she saw an iridescent figure of a man on lane fourteen picking up a glowing ball. Collecting her presence of mind, she grabbed her webcam, pointed it at the ghostly shape and turned it on. Shaking, she tried to hold her computer steady. Not believing what she was seeing, she knew there had to be a rational explanation. Perhaps some machine was projecting the image onto the lanes. Perhaps a real person stood in front of her in glowing phosphorescent powder.

Whatever or whoever it was, picked up the ball, and knocked down the spare pin. Then the ‘apparition’ bowled three strikes in a row.

Unexpectedly, he turned and glared at her, fire shooting from his eyes. Pins flew from all the lanes at her. Her heart racing, she ducked under the score table.

Ashley Ladd lives in South Florida with her husband, five children, and beloved pets. She loves the water, cats, and playing on the computer.

She's often incorporates humor and adventure into her books. She also adores very spicy romance, which she weaves into her stories.