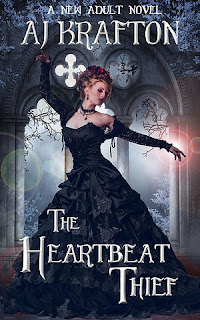 Now available in Paperback!
Haunted by a crushing fear of death, a young Victorian woman discovers the secret of eternal youth—she must surrender her life to attain it, and steal heartbeats to keep it.
In 1860 Surrey, a young woman has only one occupation: to marry. Senza Fyne is beautiful, intelligent, and lacks neither wealth nor connections. Finding a husband shouldn’t be difficult, not when she has her entire life before her.
But it’s not life that preoccupies her thoughts. It’s death—and that shadowy spectre haunts her every step.
So does Mr. Knell. Heart-thumpingly attractive, obviously eligible—he’d be her perfect match if only he wasn’t so macabre. All his talk about death, all that teasing about knowing how to avoid it…
When her mother arranges a courtship with another man, Senza is desperate for escape from a dull prescripted destiny. Impulsively, she takes Knell up on his offer. He casts a spell that frees her from the cruelty of time and the threat of death—but at a steep price. In order to maintain eternal youth, she must feed on the heartbeats of others.
It’s a little bit Jane Austen, a little bit Edgar Allen Poe, and a whole lot of stealing heartbeats in order to stay young and beautiful forever. From the posh London season to the back alleys of Whitechapel, across the Channel, across the Pond, across the seas of Time…
How far will Senza Fyne go to avoid Death?