This year I’m counting down the days ‘til Christmas with books and other fun things readers enjoy! I love the Holiday Season so I’m sharing ideas for you to fill your holiday stocking! 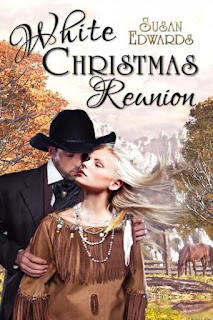 Bodil Quinn is a struggling rancher about to lose his land to a corrupt banker. His godfather offers to pay off the bank. The catch? Marry the man’s granddaughter who's been raised by the Lakota since she was six years old. He only remembers her as the little girl who followed him everywhere and finds himself unprepared when he meets the woman she's become.

Beth Ann was captured by the Crow when her family headed West. Rescued by the Sioux, she was adopted into their tribe. She is happy with her Lakota family and has no intention of returning to her grandfather's world. Not even for Bo, the boy next door she'd once adored.

Can Bo convince Beth Ann to put her past resentments and anger aside for a new future with him? Join him and the rest of the White family for a heartwarming reunion.

Bo stared down at Beth, captivated by how the moonlight turned her blue eyes into a silvery sheen and her blonde hair nearly white. He let his gaze roam over each delicate feature, as though committing them to memory. She sighed, her lips parting. Mesmerized, he leaned forward, but instead of kissing her, he drew her close, slipping both hands around her narrow waist and rested his chin on the top of her head.

To his delight, she leaned in, wrapped her arms around his neck, her head tucked into the hollow of his throat. The night shadows wrapped them in the magic of music and night. From somewhere in his childhood, the words to the music came back to him, and he realized the Jones brothers were playing a ballad that had been one of his mother’s favorites. Their deep voices blended and added magic to the evening, and somewhere off in the distance, he heard the soft strains of a mouth organ.

Bo hummed along for a moment, setting the tune in his mind. Then he let his voice join theirs. He sang, low and soft, words of love and longing.

The magical moment brought tears to Beth Ann’s eyes. The richness of his voice vibrated through every inch of her body, drawing longing to the surface with the same skill of those creating magic with a strum of their fingers over strings.

Bo’s voice, his warmth, his scent wrapped her in a cloak of wonder. Her parents had danced like this for as long as she could remember and she’d danced with her father, but this was the first real dance with a man who wanted her, and she let the romance of it lead her. Tonight, she followed her feelings and gave in to the need to be held and to hold, to need and be needed.

When Bo’s voice faded away, she glanced up. “You have a beautiful voice,” she said, her fingers moving across his shoulders.

“Inspired by your beauty, Bethy.” He lowered his head.

Beth Ann rose onto her toes and pulled his head to her, meeting him. With no shyness, she kissed Bo. There was no dancing, no teasing, just hot, burning need. He pulled her closer, one leg pushing between her legs, one hand at the small of her back, the other behind her neck.

~Tricia
Posted by Tricia Schneider at 7:06 AM