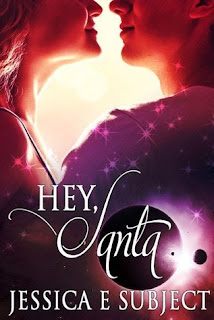 Hey Santa by Jessica E. Subject
My rating: 4 of 5 stars

She doesn’t want a lot for Christmas…

Claire Otton dreads spending another holiday alone. When her best friend convinces her to approach the sexy mall Santa, she takes the chance and asks him out, hoping for so much more.

He’s waiting under the mistletoe…

Although Andreas Castellanos blends in on Earth, he knows he will never belong. But when the gorgeous woman he’d been staring at invites him to dinner, he has a hard time saying no.

All they’re asking for…

Can these two lonely souls find magic together or will their secrets steal their chance of a happy Christmas?

A short and sexy romance featuring an alien who is stuck on Earth.

Claire doesn't want to spend the holidays alone, so her best friend pushes her to ask the sexy mall Santa out for dinner. Andreas is doing the best to get by on this planet without being discovered as an alien, made difficult by his natural green skin, but he can't deny his attraction to the woman who asks him out for dinner. Their need for companionship pulls them together as neither wants to be alone anymore. Andy entrusts his secret to Claire and hopes he hasn't made a mistake.

Although this was an extremely quick read, the characters were well-written, rounded and likeable. Claire's swift acceptance of Andy's origins might've seemed contrived in any other story, but Ms. Subject made the event believable and convincing. Both characters were uncertain and afraid, but willing to risk it all for a chance to be together. This was a delightful story to read and perfect for a single sitting.

I also enjoyed the bonus story at the end, Alien Kisses at Midnight. It is a quick glimpse into the beginning of a beautiful relationship between a woman and an alien banished to Earth for doing the right thing. Dena and Haul captured my attention from the very moment she ran into him with her car. A very entertaining story!


Read More About This Author

View all my reviews
Posted by Tricia Schneider at 7:06 AM