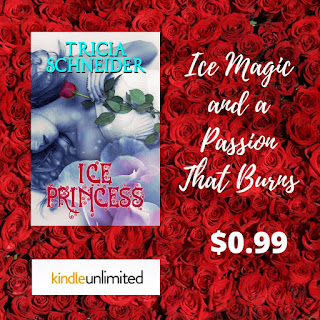 Ice magic and a passion that burns...

Princess Lily is determined to save her kingdom from the evil influence of the sorcerer in their midst. When she makes a stand, he curses her beloved to turn into a dragon and casts a spell that seals her in a block of ice where she sleeps for all eternity.

Eternity arrives earlier than expected when Rick Stamos tears down a wall to the tavern he's renovating. He never expects to find a woman encased in ice hidden in his basement. After melting the ice, he's more surprised when the woman wakes and claims he is her beloved.

Did the spell that kept Lily frozen for so long also curse Rick? Is he really her beloved or a stranger with the same face? 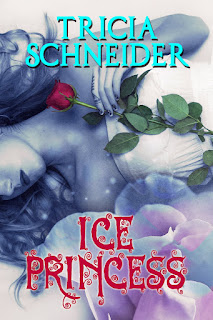 He stretched his right arm toward the ice, his fingers splayed wide. He forced his tense muscles to relax, closed his eyes and concentrated on the warmth deep within. A flame flickered there, light in color, hidden deep inside him. Once he located the flame, he stoked it, encouraging it to grow, expand, fueled by his desire to bring the heat to surface. The fire sparked and lengthened, grew until the warmth spread to his chest.

He focused the heat to travel through his arm to his right hand where his fingers spread open.

He placed his hand on the ice, closed his eyes and concentrated on heating his hand until he felt the solid block beneath his fingers soften. The ice melted beneath his touch. He blinked his eyes to watch the solid turn to liquid.

“Shut up.” Rick forced his concentration back to the heat he controlled with his hands. It was a trick he had discovered when he was a teenager. He’d accidentally burned down the shed in their backyard because Rick’s temper flared when he found out that Pete had ‘borrowed’ his bike and returned it with two flat tires.

Since then, he tried to keep his power under wraps, but on occasion and with no one other than Pete or Steph around, Rick tested it. It was like a muscle. To keep it under control, he had to use it from time to time, to maintain his discipline so it wouldn’t flare to the surface without warning one day.

It would be more than embarrassing if he burned someone’s car on the highway if they cut him off. Road rage sent to a whole new level with a guy who could spark flame from his fingertips.

It took some time to melt the ice. There was an entire casket full, but after a while the clothing on the woman’s body became visible.

She wore a long white, velvet gown trimmed with lace and satin. Her hands were folded over her chest with a single rose clasped between her bejeweled fingers. She was elegantly dressed as a woman of nobility and placed with great care before her body was in some way submerged in water and frozen.

Rick wondered if she was someone of importance. A woman lost within the pages of history and time.

The ice near her head melted away revealing a face of rare beauty. Perfect, pale skin with red-rose colored lips. Her midnight black hair cascaded in waves around her face and shoulders, dampened by the melting ice. Matching black eyelashes swept down over her cheeks.

Rick wished he’d known the color of her eyes. As he stared at the woman, a humming began in his blood, a strange sense of familiarity itched in his brain.

Had he seen this woman before?

It was obviously not possible. Perhaps he’d seen a woman with her likeness somewhere. An actress on television or a movie. Or someone in the tabloids.

Pete whistled with appreciation from his elbow.

“What?” Pete said as if seeing his brother’s reaction. “You don’t think?”

“More than beautiful. She’s exquisite. Like a porcelain doll. And the way she’s posed in the block of ice.” Pete paused and leaned over her for a closer look. “She reminds me of someone.”

“You, too?” Relief swamped Rick. He wasn’t the only one with this nagging sense of familiarity. “She reminds me of someone, too, but I just can’t place her face.”

“You know,” Pete sighed. “The fairy tale. Snow White and those dwarfs. Or maybe Sleeping Beauty. I get those two mixed up. There’s a lot of comatose gals in fairy tales.”

“That’s not what I meant,” Rick said, shaking his head. “I meant a real person. Not some imaginary fairy tale girl.”

“Maybe she’s not so imaginary.” Pete waved his head. “Maybe one of us should kiss her.”

“Kiss her to break the spell.”

“Yeah, you’re right. You never know anything. Ever.”

Rick continued to stare at the woman as the ice melted into puddles of water on the stone floor. He eased back the heat in his hands and then folded his arms across his chest.

“A princess. Maybe a queen.”

Rick glanced at Pete with a raised eyebrow.

“Well, she must be someone important. Look at the way she’s dressed.” An exact echo of Rick’s earlier thoughts.

Rick bent over the woman, taking in her beauty once more and the deep suspicion he knew her. His gaze swept over her face and form, then fell to the rose. It was a rose in full bloom. Not wilted with age, neglect or natural decay. A rose with full, blood-red petals on a stem laced with sharp thorns.

How could a flower remain in such perfect condition in these types of circumstances?The whole situation seemed incredulous. If Rick hadn’t known better, he’d say this whole thing had been set up as some prank.

He pried the rose away from her cold fingers, taking the flower in his hands to inspect more closely.

“I guess she could be nobility,” Rick said. “But she—”

A gasp stopped him from speaking. The sound came from the woman.

Both Rick and his brother stumbled back a few feet, stopping to stare at the now breathing woman on the remaining block of cracked and melting ice.

Rick tilted his head, staring at the woman’s ample bosom rising and falling with each breath.

Then her black eyelashes flickered across her cheeks, sweeping up to reveal the greenest eyes Rick had ever seen on another human being. They were a deep, vibrant emerald color that appeared almost inhuman and yet so beautiful he couldn’t compare them to anything else.

The woman blinked and took another deep, gasping breath.

The rose fell, forgotten from his fingertips as Rick returned to the woman’s side and knelt beside her.

As soon as her gaze met his, she smiled. Her lips curved and her face brightened with love and warmth and radiance. An electric shock zipped through his arms and legs, settling deep in his chest. Rick knew at that moment he was lost.

“Ashford.” The woman’s voice was like a song of spring. Light, full of hope, happiness and renewal. “You found me.” 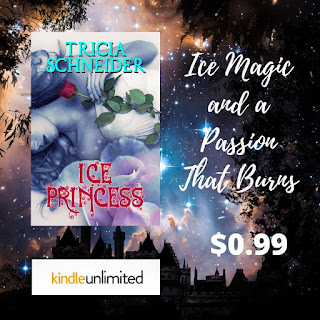 Posted by Tricia Schneider at 1:39 PM