Book Spotlight: At His Command by Felicia Forella 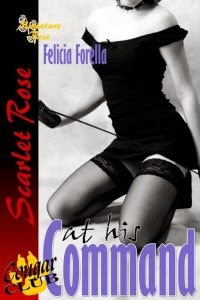 With a long and bitter divorce behind her, Julia Stone is barely back on her feet when she's suddenly swept off them again by a hot young executive with a healthy appetite for sexual dominance. But after years of emotional submission to a controlling ex, will she choose to submit?

Workaholic Dalton Fairchild has slaved night and day to build his own computer technology company. All work and no play makes Dalton a boring boy. However, a chance encounter with Julia challenges the dom in him, and he must convince her that, though she's At His Command, submission is the ultimate power.

He was so damn handsome, the candlelight softening the lines of his face, the reflection flickering in his eyes. When he looked at her, like he did now, she felt ten years younger and beautiful.

He threaded his fingers through her hair, cupping the back of her head. He tugged, bringing her face closer to his. “I’m so glad to hear that.” His hot breath feathered her mouth. “I have high hopes for later.”

A puff of warm air caressed her cheek. She didn’t know if she closed the distance between them or if he leaned closer. All that mattered was his lips claiming hers with a soft kiss. Her breath caught in her throat on a gasp of pleasure that allowed him to stroke his tongue inside her mouth, tantalizing her with the promise of more.

Clutching at his lapels, she tugged, wanting him closer. Despite her best efforts, he kept the contact light and full of promise. His firm lips molded her mouth to fit his, and his tongue coaxed hers to play. She yielded herself to his masterful command and relished his skill. Even though he only touched her lips and the back of her skull, her entire body tingled.

Every inch of her skin cried out for a piece of the action. Her breasts filled the cups of her built-in bra, weighed down with the need to feel his hands. Her nipples puckered, painful with the need to be stroked. Her pussy clutched and spasmed, empty and aching. She wanted nothing more than to climb onto his lap and rub against him, good girl rules be damned.

A discreet cough separated them, the black and white attired waiter backing out of the room having served their first course. The tang of balsamic vinegar rose from the plate of mixed greens. She picked at the salad, her mind occupied with thoughts of the kiss and what he had planned for later.

Looking up, she met his gaze, the lust in his eyes unmistakable, even from across the table. “Yes?”

“You need to understand that I have more in mind for us this evening than just dinner.” The roughness in his voice scraped her nerves the way she wanted him to suck her nipples. “I want more of you than the simple taste of you. I want to fuck you.”

Buy at The Wild Rose Press

About the Author:
Felicia Forella first began writing in grade school with the help of a friend. Who dragged who along is still up for debate. She became hooked on romance in high school when her mother bought her a (now autographed) copy of “Ashes in the Wind” by Kathleen Woodiwiss. (See what you started, Mom!) A long hiatus from writing began in college when she realized studying took up a great deal of time and partying took up the rest. She began writing seriously again in the late 90’s and her New Year’s resolution for the new Millennium was to become a published author. She is proud to say this is one New Year’s resolution she actually accomplished. Felicia is a former Air Force brat, which might explain her obsession with men in uniform, who lived all over the South and in Spain. She now lives in PA with her hero husband and her hero-in-training college-age son, who is in Air Force ROTC. Although, given her choice, they would be living somewhere down south as close to the ocean as humanly possible. They have a middle-aged beagle/border collie mix affectionately known as the Supermodel beagle, who is the only female in the house who responds to her husband’s every beck and call.

a Rafflecopter giveaway
Posted by Tricia Schneider at 10:45 AM